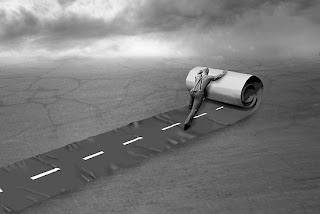 Two roads diverged in a yellow wood
And sorry I could not travel both
And be one traveler, long I stood
And looked down one as far as I could
To where it bent in the undergrowth

Than took the other as just as fair
And having perhaps the better claim
Because it was grassy and wanted wear
Though as for that, the passing there
Had worn them really about the same

And both that morning equally lay
In leaves no step had trodden black
Oh, I kept the first for another day!
Yet, knowing how way leads onto way
I doubted if I should ever come back

This has always been my favorite poem. Through the ups, downs, twists and turns of life... there will always be a mountain to climb, a path to tread, and choices to make along the way.

There have been many times in my life when I have stood at a fork in the road, carefully weighing my options, and contmeplating the best path. Many times my choices were wise and often times they weren't, but I'm thankful for the valuable principles taught by each.

Recently, I stood at a crossroad. Once again, two paths diverged in the woods before me but this time it was different...

As a parent, sometimes it's difficult to know which path to take. Being a custodian of God's will is a huge responsibility. Each step I take, I take for two. I have come to realize that I can't fear the road less traveled. These roads, when taken, change the world... one step at a time. I hope that by carefully selecting the path.... a path paved with faith, hope, prayer, compassion, and unconditional love... perhaps, "it will make all the difference."