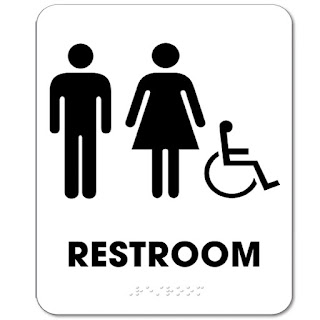 With all the upheaval in the press lately surrounding transgender issues, I should've known that it would be a mere matter of time before those issues took "center stage" at a venue close to home. I was asleep after a four-day stretch of working cases when John got a call from a local news station. They were looking for me and asked if I would like to make a public statement regarding the social contention surrounding transgender rights in the Fort Worth school district where Kammie attends school. I had no idea what they were referring to until I turned on the news later in the evening and realized that the Fort Worth School District, where Kammie is a student, had made National headlines over a very political controversy regarding a recent policy established and enacted by the Superintendent of the school district and it's board members. The policy directs district employees to “acknowledge the gender identity that each student consistently and uniformly asserts,” and provides provisions that allow them to use the bathroom that aligns with their gender identity.
This week the new provisions culminated in a public appearance by the Lieutenant Governor of Texas who flew to Fort Worth in a political power-play to publicly call for the Superintendent's resignation over the issue. A huge fiasco ensued during a school board meeting later that night where supporters of the policy, and those in equal opposition, showed up with hand-made signs chanting well-thought phrases to express their paralleled outrage. The crowd flooded out into the hall and outside of the venue of the meeting. Ultimately, several in attendance were escorted away in handcuffs. The near-riot led the evening news on every channel and was ultimately picked up by the Associated Press, as well as several other National media outlets. What "FUN" for some. 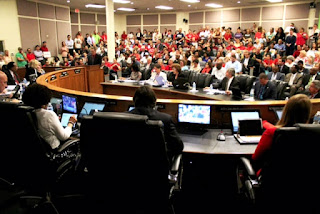 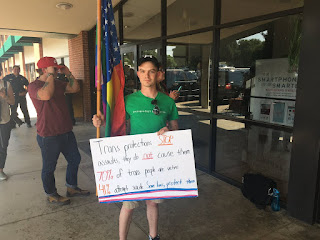 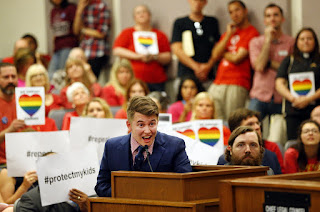 Our social and cultural obsession over transgender people has been a topic of considerable scrutiny over the past few years; most notably with the transition of Caitlyn Jenner, a former Olympic athlete, who chose to assert her identity on the cover of Vanity Fair dressed in a corset. I remember feeling frustrated by the sight of her scantily clad physique splashed across newsstands. Over the years, I had conditioned myself not to focus on the thoughts and opinions of others. However, this situation was different. When a public figure speaks out about a circumstance or condition that effects the lives of other people, they unwittingly speak (or act) on behalf of all of them without their consent. One of the most profound challenges that transgender people face is the misconceived notion that their experience is, somehow, a sexual one. It's a misunderstanding that fuels paranoia and fear about an experience that is anything BUT sexual. It's an identity issue, and nothing more. The sight of Caitlyn Jenner's body on the cover of Vanity Fair, exposed in a white silk push-up corset with the caption "Call me Caitlyn" scrolled across the bottom in large bold letters was anything but an assertion of WHO she was.  In her desperation to be seen as a woman, she had failed to realize a valuable opportunity to educate the public, or raise awareness, about a condition that is defined by identity. The media made it about sex. After all... What could possibly sell more copies of a magazine than an extraordinary Olympic talent, who had out-competed many of the worlds best male athletes, displayed on the cover of Vanity Fair in a skin-tight negligee? 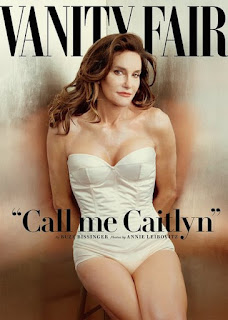 What good could come from this? What good could come from any of it? I have spent a great deal of time over the last few years thinking about the emotionally charged situation and counseling Kammie about how to conduct herself when she encounters those who don't understand her plight.  I have taught her to be as patient and understanding of her opposition as she would like her opposition to be with her.  Fortunately, this approach has been very effective and her life has not been adversely impacted by the drama that has unfolded in the press.  Our lives have been blessed by many amazing and supportive peers, professionals, and friends. Kammie enjoys school and is thriving socially. We have not been stealth about her condition. We have embraced opportunities, both publicly and privately, to educate and inspire others. We are passionate about this issue and we are happy to discuss our experience and share our testimony with others in environments that are conducive to listening and learning. Fighting doesn't lead to understanding and it certainly doesn't inspire change. When people are angry, they don't listen. Where people don't listen, nobody can be heard, and if nobody can be heard, nothing can be learned... Nothing stunts growth like ignorance.

When I was a young girl in high school, there was a transgender woman who frequented the local mall. She would sit on the bench there and express herself artistically through drawings and paintings. She wore second-hand dresses and orthopedic shoes with old tights and thick make-up in her best effort to cover up a five o clock shadow. I remember going to the mall with my girlfriends and following her around. We pointed at her, giggled and gossiped, and cleverly nick-named her the "Shim" (part "she", part "him"). When I looked at her back then, all I saw was a freak... I would give anything to see her today. I would give anything to have an opportunity to speak to her about the things I didn't understand back then; things that have become an intimate part of my own life. I would take the time to get to know her. I would thank her for her courage. I would listen to her and learn as much as I could about her. I would ask her about her life and, most importantly, I would apologize for all of the times that my actions had caused her pain. I would apologize for all of the times she went home, after I had pointed at her and ridiculed her, to wash make-up from a tear-stained face.

When I think about the woman in the mall and my actions all those years ago, I can't help but draw a correlation to the opposition about these issues and the way it could potentially impact the precious life of my child today. I'm a compassionate person by nature and I have always tried to step outside of the social expectations of society to see the world from an authentic point of view but, somehow, I failed to "see" the woman in the mall. Why didn't I see her? Why, when I looked at her, did I only see an opportunity to criticize and ridicule? Likewise, how could I fail to see my own child for nine long years???  What we see is altogether affected by what we expect to see.  I have come to realize that the gift of sight necessitates that we interpret what we have seen through impressions of the heart.  The eyes are often the greatest deceptors of the soul...

Kammie's life began like most other children's lives. I'll never forget the day she came into my world and the announcement was made, "It's a beautiful baby BOY!" What joy... what gratitude I felt at that moment and in the years that followed as the blessings of her precious little spirit were realized. Kammie has been blessed with many special gifts, talents, and attributes... but along with those endowments has come some incredible challenges. As Kammie began to grow and develop, it became evident that her body and spirit were not in harmony. We noted some eccentricities in her behavior as she consistently gravitated to gender specific interests that were in stark contrast to the “Male” designation printed in bold letters on her birth certificate. We continuously tried to redirect Kammie’s expression toward traditional, socially accepted, gender-appropriate behavior. At the age of six, Kammie mustered the courage to tell us that something was seriously wrong with her. She told us that she was a girl and that God had made a mistake. She said that she wanted to “go live with Jesus” so she wouldn’t have to hurt anymore. I tried to reassure her (and myself) that it was just a phase and that she would eventually grow out of it. She didn’t.

The years passed and we began to understand who Kammie was. We began to realize that our greatest failure stemmed from our expectations. There are many mysteries that we cannot fully understand in life. However, Kammie and her identity, is NOT one of them. We have come to understand that identity cannot be defined by an individual’s physical body. It goes much deeper. It’s spiritual, it’s sacred, and it exists in the soul of each and every human being. We chose to accept what we couldn’t understand at the time and, with the help of many incredibly supportive people, we have been able to fully embrace Kammie for who SHE is. That decision has changed our lives, and SAVED hers. Looking back now, the most difficult aspect of our experience is the realization that Kammie has always been there, but for nine years we refused to acknowledge her existence. She spent those years isolated and alone in a reality that nobody understood.

We need to do all we can to connect transgender children to the world around them. More than 50% of these children attempt suicide, at least once, during childhood and adolescence. Together, we have the potential to make incredible life-saving and life-sustaining discoveries... but first, we have to listen. We have to abandon our fears and open the door to understanding.

Today Kammie is a healthy, happy, beautiful, fun-loving, seventeen year old young woman with more friends than I can possibly count. Remarkably, all of those friends are aware that she is transgender. It makes no difference to them. They love her just the way she is. Most importantly, Kammie loves herself. She knows who she is, she is recognized for who she is, and she is comfortable in her skin. Kammie is a child who exudes confidence, joy, and passion for life. She is not merely surviving a transgender existence; she is thriving in spite of it. I guess my "public statement" is this... Dictating which bathroom Kammie uses to urinate or defecate will NOT break her spirit.  It will NOT destroy her identity.  It will NOT change who she is.  AND... It will NOT define her...  However, discrimination WILL define the rest of us.  It WILL define our culture.  It WILL define our society.  AND... It WILL define our humanity.

It will... and it always has.
https://www.youtube.com/watch?v=XXxBgSGQcOI 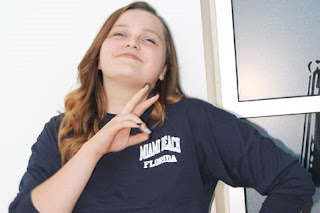