The Parable of the Roller Skates... 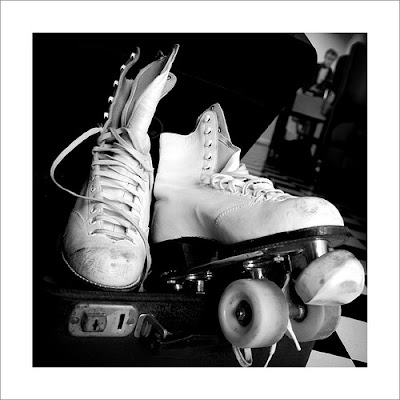 I arrived home from work a few nights ago and went about my evening routine, asking the children about their day. Cammie said that her day had gone well. She was lacking her typical enthusiasm, but I didn't think much of it at first. Before long, I noticed that she had gone to her room. I walked down the hall to check on her. I could see her in bed, covers pulled up to her neck, with the bedroom light off. It was only six in the evening - I knew something was wrong, the scenario was familiar... I knew she had "dropped the box". I made my way into her bedroom, told her to scoot over, climbed under the covers, and snuggled up beside her...

That was all it took. The tears began to stream down her face, followed by sobs. She did her best to escape into the comforter, burrowing deep into the bedding as if she were trying to disappear... disolve into anything... the air, the room, the darkness. She spoke in tearful, muffled tones through the coccoon of blankets that enshrouded her, "I feel like a germ." The words cut straight to my heart. I felt my spirits sink as I "collapsed on the box" beside her... "What happened?"

Doing her best to settle down, through broken sobs she tried to explain, "My best friend told me that she can't sit by me anymore at school. Her mom called the teacher and had her moved to another table because..." Her voice trailed off, once again enveloped by sadness. She didn't need to finish the sentence... I knew.

I can't find the words to express what's in my heart. I can't even begin to convey the pain that I feel when she faces these bitter challenges. Why can't people just see her? Why can't they just see? Why?

The other night I read the following scripture...

1 Thessalonians 5:17-18
Pray without ceasing. In everything give thanks, for this is the will of God.

years ago, I had an experience that I affectionately refer to as “the parable of the roller skates”. When I was six years old, I got my first pair of roller skates for Christmas. My family was living in Utah at the time and there was about three feet of snow on the ground so I resigned myself to “trying them out” inside. They were fairly rudimentary in comparison to the high tech roller blades that kids dash around on today; nothing more than a royal blue pair of Converse sneakers bolted to a metal base with bright red rubber wheels. I can remember lacing them up, and enthusiastically scrambling around the linoleum floor in the kitchen as I struggled to “get the hang of it”. Weeks passed, the snow melted to welcome spring, and the kitchen floor became increasingly small as my ambition for bigger and better territory advanced with my skill level. It was decided, I had graduated to the street out front with the conviction to explore my capabilities on the open road.

The day had come; I woke that morning to the high pitched shrill of the wind as it whistled through the cracks of the windowsill. Mom and dad were getting ready for work and I could hear my father on his way out the door, giving Shaun and Corey specific instructions not to go outside. From the sound of his voice, I could tell he meant business. He reported wind gusts of up to one hundred miles per hour and said that severe weather warnings had been issued. Disappointed at first, I tossed my skates to the side and resigned myself to another day of kitchen confinement. I peered out the window, and a bush caught my eye as it effortlessly bounded down the street (roots in tact).

Suddenly, a brilliant idea came to mind. What was I thinking? This was the perfect day to skate. All the components were present for an ideal skating experience; wind, open road, and wheels! I could just lace up, kick back, and (much like the bush before me) effortlessly make my way down the street.

Bound and determined by this “once in a lifetime” opportunity, I snatched up my skates and made my way to the living room. I was diligently threading the loops when I noticed another set of feet toe to toe with mine. My eyes reluctantly climbed their way to the look of disapproval on my mother’s face. After questioning my sanity, she informed me in no uncertain terms that I would not be allowed to skate outside and attempted to explain the potential repercussions. Dad had already gone and when mom had finished her “lecture”, she left for work. Shortly thereafter, the phone rang and Shaun answered it. Apparently the neighbor’s shed had blown over and was making its way down the street. A friend had called to share the exciting news and like most obedient boys do, they set out to estimate the damages.

Well, I’m no fool... when the wind of opportunity blows, I’m going skating, which is exactly what I did. I quickly laced up, made my way to the front door, turned the handle, and gave it a little push. The wind caught the door and it flew open, nearly coming off the hinges as it slammed against the frame of the house. I struggled to force it closed (which was no easy task on roller skates) and somehow wound up in a disheveled little pile of pigtails on the ground in front of the house. It was apparent that I would not be able to skate to the middle of the road. Oh no, the wind was much too powerful for that... I was going to have to crawl my way there. I struggled against the wind on my hands and knees, dragging my heavy skate-laden feet behind me. Finally, I had reached the center of the street, and with the runway before me, I fought to my feet.

With arms outstretched and legs spread, I created as much body surface area as possible for the wind to “work with”. In the beginning everything went perfectly according to plan. I felt the force of the wind against my back and began to roll without any effort on my part. A satisfactory little smile attacked my face and I giggled as I picked up speed. “I am brilliant”, I thought. Faster and faster, I rolled, until my smile dissipated with horror and panic when I realized that I was still gaining momentum and moving much too fast to attempt a “crash landing”. I was flying by houses, left and right, and could hardly make out the faces of my neighbors as they clung to their windows in wide-eyed disbelief.

What was I going to do? I knew that if I didn’t “take the fall”, I’d continue to pick up speed and eventually crash anyway. I quickly made the determination that if you’re going to be stupid; you’ve got to be tough so with some assistance from a pesky pebble or two, I dove into the pavement. I skidded a few feet on my knees, then my stomach, and the velocity of the landing seemed to carry my feet up over my head in a terrific Olympic-style somersault. Evil Kinevil had nothing on this kid! The wind continued to blow and with it, I continued to roll down the street. I struggled to turn around and with my face to the wind, once again, fought to my feet and attempted to skate back to the house. The blinding force of the storm made it difficult to see but I managed to force my eyes open long enough to notice something quite peculiar. The houses that lined the street were passing the wrong way in front of me... NOT good... Despite my valiant effort, I was rolling backward and gaining speed. Suddenly, my butt made explosive contact with the pavement in a tumble that would have won the gold in the Olympics for idiots.

What was I going to do now? I kicked off my skates and, clawing at the ground ahead of me, attempted to crawl home. The storm was much too powerful and I felt like a rag-doll in a clothes dryer as I repeatedly tumbled backward in the wind. I had never been so homesick in such a short period of time. I could see the house, it was so close but it felt absolutely unattainable. I was in pain. My heart sank. I sobbed as I struggled to fight my way home. I was alone, hurting, and the storm raging against me was merciless. My knees were shredded. I was about to abandon all hope when an elderly neighbor lady in a house close by invited me in to wait out the storm and called my mother, who rushed home to nurse my wounds.

As I look at my knees today, multiple scars remind me of a time in my life when a valuable lesson was learned. I can’t help but draw an analogy between that physical experience and the spiritual experiences in my life. There are times when all of us encounter overwhelming storms as we struggle to move through mortality. It isn’t long before we collapse and discover that our individual capabilities aren’t enough to take us home. There are times when the desire to find refuge in the love of our Father seems absolutely unattainable as the influence of adversity mercilessly rages against us. It is at these times of great turmoil and distress that we become acquanted with God. These are the moments that demand faith. These are the experiences that humble us before Him. During our weakest moments... he lends his strength. He calms the storm, heals our pain, and "carries us home".

Sometimes it's difficult to have faith... to "give thanks in all things". I have often wondered if it will ever get easier? I have come to realize that it probably will not... but by faith, we can be strengthened through God's grace. Each one of us has been blessed with a spiritual scar or two. I pray that Cammie will learn to love her "scars". I pray that each “scar” will refine her relationship with Christ and cultivate her spirit for His eternal purpose. I pray that she will learn to love the storm... and "In everything give thanks".

I pray when the storms of life rage against her and the situation seems hopeless, she will know that the Lord is there to kneel beside her, wipe the tears from her eyes, and bandage her wounds...

“And God shall wipe away all tears from their eyes; and there shall be no more death, either sorrow, nor crying, neither shall there be any more pain for the former things are passed away” (Revelation 21:4).

“He healeth the broken in heart and bindeth up their wounds”
(Psalms 147:3).

I pray that Cammie will be able to face these challenges in her life with gratitude... that she may grow in a way that she can wear her scars with honor.
Posted by Cammie's Song at 11:06 PM