The most beautiful butterfly! 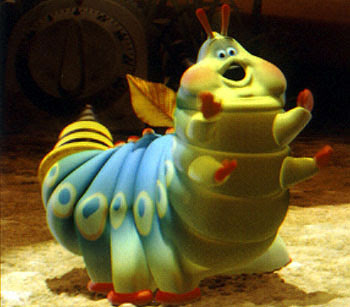 When Cameron was little, as most kids do, she quoted various scenes in her favorite movies. After she watched A Bug's Life... she ran around the house doing her best to imitate the scene where Heimlich, the Caterpillar, turns into a "beautiful butterfly". She would imitate the character, lower her voice, and say... "I'm finished! I'm the most beautiful butterfly!" It was hilarious... and we all used to laugh...

When I watch the clip of this Disney movie, I can identify a parallel in my child's life. Throughout the film, Heimlich talks with great anticipation about the day he will become a butterfly. Although, his transformation was hardly significant to those around him, he felt beautiful. He had found his wings, but needed a little help "getting off the ground". It's interesting how a children's cartoon can perfectly exemplify Cammie's experience. Physically, nothing has changed about Cammie except for the pronouns we use and the clothes she wears. Emotionally, spiritually, and psychologically - however - things are profoundly different...

When we first decided to support Cameron and share the news with those closest to us, we received a variety of responses and I felt my confidence waiver with each "nay sayer" that I encountered.

From the time I was a little girl, my parents had repeatedly expressed their frustration by saying, "a thousand people can think you're wonderful, Christina... but if one person doesn't approve of you, it rocks your world."

We like to believe that as we grow older, we change in profound ways... but it seems in adulthood, I have become a physically mature version of the same little girl, with the same fears and insecurities. I knew what it would take for Cammie to find peace and happiness but I wanted everyone around me to share my perspective, understand our challenge, and support my decisions. I struggled each day with those who didn't approve... digging deep and sifting through my psychological, spiritual, and emotional reserve for any scrap of strength or wisdom that could get me through. I've always had an ambitious "change the world" mentality but when faced with the challenge to pioneer a cause, I felt my confidence wane and a million doubts and "what ifs" haunted my mind.

My dad came for a visit. Naturally, he had a lot of questions. I did my best to answer them but found myself trying to be convincing - rather than informative. I was overcompensating for my own insecurities. There were times when I would step outside of the situation and try to catch a glimpse of the view from the outside. I would find myself doubting our reality with a variety of invasive thoughts, "this is absolutely nuts! What are you doing? You must be crazy!" I think that Cameron sensed my insecurity and was privy to many of the conversations that I was having with my father. She began to follow me around the house. Everywhere I went, I had a Shadow. If I went to the bathroom and ran out of toilet paper, I was in luck because I had a personal bathroom attendant. At one point my dad made the comment that attention can be very addictive and questioned whether or not I had considered that Cameron's actions might be symptomatic of a greater need for attention. My dad has always been a trusted friend, confidant, and advisor. With Cammie's recent onset of separation anxiety, I felt myself entertaining the possibility that this might, in fact, be a ploy for attention.

It all came to a head when my father and I made plans to run a couple of errands. Cameron wanted to come and when I told her that she wasn't invited... that dad and I needed some time to talk in private, she began to panic - verbalizing her objections to being left behind. I was feeling overwhelmed, frustrated, and confused by her behavior. I turned around and shouted, "Why do you have to go with me everywhere I go?! Why do you have to have my undivided attention?! Is this why you act like a girl.... because you want my attention?!"

The room fell silent. She didn't have to say a word... I could have kicked her in the gut and it wouldn't have had more of an impact. She was evidently devastated. Her eyes welled up with tears, she solemnly shook her head in denial, and quietly headed down the hall. I took a moment to calm down before talking to her. I found her in my bed crying with the covers pulled up over her head. I apologized and we began to talk. I asked her why she was so clingy... why she was following me around. Her response about broke my heart. In that moment, I caught a glimpse of her world. She said, "If something happens to you then I want to die too. I don't want anything to happen to you... I don't want to be alone." Her fears were so intense. I realized that, although she was a child - she knew that I was her strongest advocate and supporter. She couldn't bare to consider what her life would be like without that support... she could sense the emotional negativity of others impacted by the situation and realized that if I weren't arorund, she would - once again - find herself completely isolated. I knew that no matter how difficult this challenge was for me, nothing could compare to what she was experiencing. I reassured her that her Heavenly Father loved her very much and that he knew we needed each other. I told her that he would take care of us and everything would be okay. I felt ashamed for questioning what I knew to be true about my child.

I was blessed with the spiritual reassurance that we were doing the right thing a few days later. The day had come to take Cammie shopping for her new wardrobe. Emotionally, I had been dreading this day for weeks... grieving the loss of my son. Cammie put on one of her favorite outfits, I fixed her hair in a cute little girl's style, and we headed out shopping. It was her "coming out" day - the first time that she had gone out in public as a girl. As the day progressed, I noticed Cammie's personality blossom. No longer plagued with how little boys are socially expected to act and behave, Cammie was finally free to be herself. Her new found independence was extremely liberating. she was bubbly, funny, and outgoing. There wasn't a moment when I looked at her that I didn't find a bright smile on her face. She seemed so radiant, she practically glowed. By the end of the day, I was having more fun than I had ever experienced with her. We were laughing and joking. People were telling me how cute she was, and with every compliment her confidence soared. It was a huge shift from the depressed, anxious, despondent child that I had been worrying about for years.

That night, after we returned home, I went in my room closed the door and cried. This had become a ritual in the weeks leading up to Cammie's transition. I would do my best to encourage and reassure her that everything would be okay... that we could handle anything together... that she wasn't alone. Once she felt comforted and at peace - I would go in my room, close the door, and break down in tears... overcome with my own worries and fears. For the first time, this routine brought tears of joy. Cammie was truly happy. I knew it was going to be tough and there would be many hurdles to overcome, but somehow I knew that she would be okay... as long as she could be true to herself. It was obvious that she had finally "found her wings" and I was committed to do everything I could to help her "get off the ground."
Posted by Cammie's Song at 3:52 PM