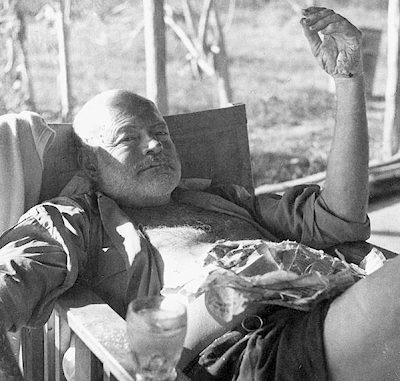 Ernest Hemingway has always been a fascinating author of classic literature. In a high school assignment titled, "Authors of Influence", I selected Hemingway. Here we have an iconic man - an all American hero, and winner of the Pulitzer Prize and the Nobel Peace Prize. He was extremely accomplished, yet a complicated and profoundly troubled man. A man of knowledge, philosophy, learning, and literary expression... who had so many demons - that even his brilliance, intellectual genius, and philosophical depth - could not quiet the voices in his head or expel the conflict from his tortured soul. The Hemingway family is the source of a lot of curiosity and speculation. Hemingway, his father, sister, and brother all committed suicide.

He came from an extremely affluent family. His father was a doctor and his mother was a musician. During his childhood, his mother dressed him in girls clothes - a twin to match his sister... something that impacted him throughout his life. He despised his mother and when he spoke of her, he always referred to her as, "the bitch". As he grew into adulthood, his troubled childhood had a profound effect on him, and he overcompensated in a heroic display of masculine and macho behaviors. He was married four times, had countless affairs, and fathered four children.

The youngest of Hemingway's children was Gregory Hemingway - a talented and athletic child that Ernest affectionately called Gigi. Gregory was gender variant. This aspect of his life was exposed when Ernest walked in on the ten year old boy, discreetly dressed in his mother's taffeta gown and nylons. Ernest went into a tirade of wrath. This experience set the stage for Gregory's "closet" gender behaviors. He devoted much of his life to trying to meet his father's expectations. Following in the footsteps of his grandfather, he attended medical school and became a doctor. He spent hundreds of thousand of dollars, underwent multiple treatments with shock therapy, eventually succumbed to drug and alcohol abuse (which led to the revocation of his medical license), and had several nervous breakdowns in an attempt to reconcile his identity with the expectations of his father. Despite it all, his inability to find an effective "cure" eventually destroyed the father-son relationship altogether.

At the time of Ernest's suicide, the two were not on speaking terms and Gregory had not seen his father since he was 19 years of age. Gregory was quoted as saying, "I never got over a sense of responsibility for my father's death, and the recollection of it sometimes made me act in strange ways." Following his father's funeral, Gregory expressed conflicted emotion... both through deep devastation evoked by the loss, as well as a profound relief. He was later quoted as saying, "I have to admit, I felt somewhat relieved when my father's body was lowered into the ground... never again would I disappoint the old man."

Gregory saw multiple psychiatrists in an effort to cure his "diseased mind". While living a life of obscurity, cross-dressing in secrecy... he experienced four failed marriages and fathered eight children. In his late 60's, during the final years of his life, Gregory underwent gender reassignment surgery and presented herself publicly as Gloria to many of her friends. Shortly thereafter, she was charged with indecent exposure and confined to a woman's detention center. The bail was set at a mere one thousand dollars... regardless of the value of her estate, seven million dollars, nobody bailed her out or came to her aide. On the morning of her court appearance, one week following her arrest, she collapsed to the cement floor of her cell and died of, what was later determined to be, natural causes brought on by cardiovascular disease.

Perhaps, what I consider to be Hemingway's most profound quote follows:

"Forget your personal tragedy. We are all bitched from the start and you especially have to be hurt like hell before you can write seriously. But when you get the damned hurt, use it-don't cheat with it."

I spent most of the day "licking my wounds" so-to-speak, and refused to get out of bed... overcome with self-pity. With each minute that passed, I became more bitter and my resentment grew as I looked to the lives of others to determine what is and is NOT fair, as well as what should and should NOT exist in my life. I was angry... "To hell with you God!" seemed to be the theme of the day. After some thoughtful consideration, I remembered the words of my sister from a similar time in my life, long ago. She said, "If you are unhappy, then you are ungrateful."

My philosophy on life has developed and evolved over time. What I have come to realize is that many of us make the mistake of comparing our lives to the lives of others. If nothing else, the curse that seemed to hover over, haunt, and lurk about the Hemingway family, serves as the perfect demonstration of our skewed perception. We erroneously believe we have a clear comprehension of the trials and adversities of others. We manage to deceive ourselves with the perception that those who are socially and financially successful enjoy some kind of magical pleasure, freedom from adversity, and abstinence of pain.

Regardless of economic or social status, I believe there are two types of people in this world... those who openly share the adversity in their lives - and those who don't. There is no right or wrong approach to mortal existence. However, those who share such complexities in life are easily disillusioned by - what seems to be - the triumphs and success of others (those whose personal demons are neatly tucked away in the closet of obscurity). In sharing, we often erroneously conclude that we are cursed while others are unfairly blessed.

I have come to realize the importance of appreciating life for all that it is... the opportunity it provides to develop cherished relationships, grow in knowledge, and experience spiritual enlightenment.

Although, no two lives are ever the same, in EVERY life there is a test. Some of us choose an "open book" approach that exposes each and every vulnerability, while others choose to work through their difficulties in private. The Hemingway family lived their lives in the "eye of the public" and, therefor, their test was an "open book" - and in many respects - an unfortunate invasion of their privacy. Their experience demonstrates a profound truth... regardless of social status, public notoriety, and personal success - we are all essentially the same. Whether you have been blessed with wealth, or suffer the indignation of a panhandler on the street... no one is granted an exemption from life's test. Through his own personal pain, Hemingway managed to uncover a profound truth...

"Forget your personal tragedy. We are all bitched from the start and you especially have to be hurt like hell before you can write seriously. But when you get the damned hurt, use it-don't cheat with it."

What does he mean by cheat??? My interpretation...

If we choose not to grow through pain in life... we might as well label ourselves "cheaters".'

Without pain, we cannot grow. Without growth, we cannot succeed. Without failure, we would not know success... and, most importantly...

NO ONE WHO HAS EVER CHEATED, HAS TRULY SUCCEEDED.
In memory of G. Hemingway...